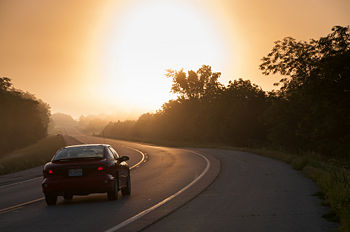 The lane width of a roadway greatly influences the safety and comfort of driving. The extra cost of providing a full 12 ft. lane on higher volume roadways is offset by the reduced costs of shoulder surface maintenance due to lessened wheel concentrations at the edge of pavement. The 12 ft. lane also provides desirable clearances between larger commercial vehicles traveling in opposite directions on two-lane, two-way rural roadways when high traffic volumes are expected. The same holds true when high percentages of commercial vehicles are expected.

Lane widths also affect the roadway's level of service. Narrow lanes force drivers to operate their vehicles laterally closer to each other than they would normally desire. Restricted clearances have the same affect. In a capacity sense the effective width of travelway is reduced when adjacent obstructions such as retaining walls, bridge trusses or headwalls, and parked cars restrict lateral clearance. Further information on the effect of lane width on capacity and level of service can be found in the Highway Capacity Manual (HCM). In addition to the capacity effect, the resultant erratic operation has an undesirable effect on driver comfort and crash rates.

Although 12 ft. lane widths are desirable on both rural and urban roadways, there are circumstances where more narrow lane widths can be used. In urban areas where pedestrian crossings, right of way, or existing development become stringent controls, the use of 10 or 11 ft. lanes is acceptable. In rural areas with low traffic volumes, the use of 10 ft. lanes is acceptable.

Auxiliary lanes at intersections and interchanges often help to facilitate traffic movements. Such added lanes are to be as wide as the through-traffic lanes but not less than 10 ft. Where continuous two-way left-turn lanes are provided, a lane width of 10 to 16 ft. provides optimum design.