232.2.1.1 Conditions that Warrant the Use of Passing Lanes

The Highway Capacity Manual contains methods to evaluate the capacity of a two-lane roadway with a passing lane.

To maximize the traffic operational efficiency of a passing lane in level or rolling terrain, it’s length can vary from a minimum of 0.5 mi. to a maximum of 2.0 mi. depending on the directional flow rate, as shown in the following table:

A number of factors may be considered when selecting an appropriate location for a passing lane. These include:

When passing lanes are provided at an isolated location, their objective is generally to reduce delays at a specific bottleneck (i.e. climbing lanes), and the location of the passing lane is dictated by the needs of the specific traffic operational problem encountered.

When passing lanes are provided to improve overall traffic operations over a length of road, there is much more flexibility in the choice of passing lane locations to maximize their operational effectiveness and minimize construction costs.

If delay problems on an upgrade are severe, the upgrade will usually be the preferred location for a passing lane.

Passing lanes at upgrades begin before speeds are reduced to unacceptable levels and, where possible, continue over the crest of the grade so that slower vehicles can regain some speed before merging.

The cost of constructing a passing lane can vary substantially, depending on terrain, highway structures, shoulders, and adjacent development. Thus, the choice of a suitable location for a passing lane may be critical to its cost-effectiveness.

The location of major intersections and high-volume driveways is to be considered in selecting passing lane locations, to minimize the volume of turning movements on a road section where passing is encouraged.

Low-volume intersections and driveways do not usually create problems in passing lanes.

Where the presence of higher-volume intersections and driveways cannot be avoided, special provisions for turning vehicles, such as exclusive left-turn lanes, are to be considered.

Exclusive right and left-turn lanes in passing lane sections are to be considered at any location where an exclusive turn lane would be considered on a conventional two-lane highway.

Opportunities to make a left-turn within the first 1000 ft. of a passing lane are undesirable. Strategies to address the turning movement could include; exclusive left-turn lane, right-in/right-out access, beginning passing lane after entrance, etc.

Where a capacity analysis shows that a passing lane is needed, several possible configurations are to be evaluated.

The recommended minimum transition distance between passing lanes in opposing directions is 500 ft. for "tail-to-tail" and 1,500 ft. for "head-to-head".

Lane and shoulder widths in passing lane sections are to be consistent with adjacent sections of two-lane highway, unless reduced widths would substantially reduce costs.

Some separation between lanes in opposite directions of travel is desirable; however, passing lanes can operate effectively with no separation. However in either situation, pavement marking and centerline rumble strip (also see Std. Plan 626.00 Rumble Strips) provisions must be addressed.

Intermittent Passing Lanes, Separated
* Often used in pairs, one in each direction of travel, at regular intervals along a two-lane highway.

* Frequency of passing lanes depends on desired level of service.

* Configuration c is often appropriate where a city or town is located at either end of a roadway section.

Intermittent Passing Lanes, Adjoining Tail-to-Tail
* Often used in pairs, one in each direction of travel, at regular intervals along a two-lane highway.

* Frequency of passing lanes depends on desired level of service.

* Has the advantage of building platoons before the passing lane.

* Has the advantage of providing lane drop areas of opposing passing lanes that are not adjacent.

* Buffer area between passing lanes in opposing directions is typically 500 ft. or more.

Intermittent Passing Lanes, Adjoining Head-to-Head
* Often used in pairs, one in each direction of travel, at regular intervals along a two-lane highway.

* Buffer area between passing lanes in opposing directions is typically 1500 ft. or more.

* Where a buffer area of sufficient length cannot be provided or where longer passing lanes are needed to achieve the desired level of service, overlapping passing lanes may be considered. See discussion of configurations of f and g below.

* May be used where space is too limited, e.g. between major intersections, bridges, etc., to provide two adjoining passing lanes with a buffer.

* Particularly appropriate over an extended section of roadway where a wide pavement is already available.

* Particularly appropriate where the ultimate design for the highway is four lanes. 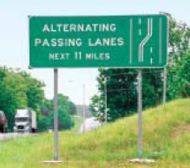 Configuration "i" illustrates a continuous three-lane section with alternating passing lanes, known as a "shared 4-lane" (also known as a 2+1) roadway (see Std. Plan 626.00 Rumble Strips). When volume demand exceeds the capacity of a shared 4-lane roadway, a four-lane cross section is to be considered.

The length for a lane addition taper is to be at least 360 ft. for a 60-mph design speed. The length for a lane drop taper is computed using the MUTCD formula L = WS, where L is the taper length in feet, W is the width of the dropped lane in feet, and S is the off-peak 85th percentile speed in miles per hour. A wide shoulder is desirable at the lane drop taper to provide a recovery area should drivers encounter a merging conflict. Safe and effective passing lane operations require adequate sight distance on the approach to lane addition and lane drop tapers.

Signing and delineation are essential to the operation of passing lanes. Additional information concerning signing and marking of passing lanes can be found in EPG 620.2 Pavement and Curb Markings (MUTCD Chapter 3B).