Standard. The color of an edgeline or centerline associated with a longitudinal rumble strip shall be in accordance with EPG 620.1.5 Colors.

An edgeline shall not be used in addition to the rumble strip marking that is located along a shoulder. 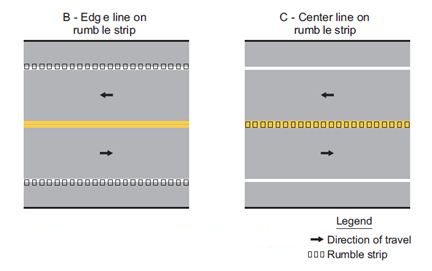 Support. Transverse rumble strips consist of intermittent narrow, transverse areas of rough-textured or slightly raised or depressed road surface that extend across the travel lanes to alert drivers to unusual vehicular traffic conditions. Through noise and vibration, they attract the attention of road users to features such as unexpected changes in alignment and conditions requiring a reduction in speed or a stop.

Guidance. White transverse rumble strips used in a travel lane should not be placed in locations where they could be confused with other transverse markings such as stop lines or crosswalks.