A two-way left-turn lane (TWLTL) may be an effective access management tool when used with other techniques such as driveway consolidation and corner clearance. TWLTL cross-sections work best in situations where traffic volume and the density of driveways is relatively low, and the proportion of left-turning vehicles is relatively high. TWLTLs are recommended in places where commercial driveways make up a substantial portion of total driveways and where the percentage of vehicles turning left at peak hour is approximately 20 percent or greater. 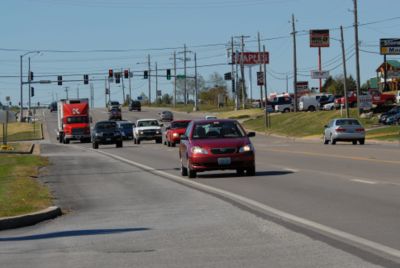 TWLTL configurations are not recommended along high traffic volume (over 28,000 AADT) urban routes. In such situations raised medians are at least 25 percent safer than multilane undivided sections and 15 percent safer than TWLTL cross-sections. TWLTL configurations are not to be used on facilities with more than four through-traffic lanes, e.g., to create a “seven lane” facility. Crash experience with such large roadway cross-sections is poor.