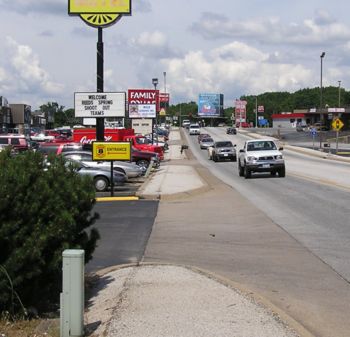 This guideline describes the recommended spacing between private driveways necessary to preserve both safety and traffic flow. Spacing between driveways must be longer on higher speed routes in rural areas than in urban areas. In urban areas, these guidelines allow for about one driveway per city block face on non freeway- major roadways and two driveways per block face on minor roadways.

In order to preserve spacing, move direct access to local streets (not arterials) where possible. In particular, access for corner lots is to be moved to a lower traffic side street whenever possible. Access can often be better accomplished on major streets through such means as frontage and backage roads, joint access, cross access and shared driveways. This guideline only applies where sight distance allows. Driveways are not allowed where sight distance is inadequate even if the driveway spacing guideline would allow them.

Provide driveway accesses on local and collector streets (side streets) rather than arterials wherever possible. Line up driveways across the public roadway from each other whenever possible. When driveways are not lined up, the spacing is to be measured from the closest driveway on either side of the road, except where a non-traversable (e.g., raised) median exists.

On urban routes where non-traversable medians exist, shorter driveway spacing may be acceptable for right-in, right-out driveways only.