This item is to bond HMA pavement mixtures to an existing roadway surface or between asphalt lifts of newly constructed asphalt pavement. Adequate bonding between pavement layers is critical in order for the completed pavement structure to behave as a single unit and provide adequate strength. Inadequate bonding between layers can result in delamination (debonding) followed by longitudinal wheel-path cracking, early fatigue cracking, potholes, slippage cracking, and/or other distresses that greatly reduce the pavement life. Unless otherwise noted in the contract, the grade of emulsified asphalt or Performance Graded binder is selected by the contractor.

The purpose of a tack coat is to achieve a bond between the existing surface and the mat in order for the pavement to behave as one homogeneous structure.

See Distributor in Paving Equipment. Several distributor equipment adjustments and settings are critical to achieve a uniform tack coat placement. The best practice for uniform coverage is to use a “double or triple lap” coverage which means that every portion of the pavement receives spray from two or three nozzles. The triple lap coverage is illustrated below: 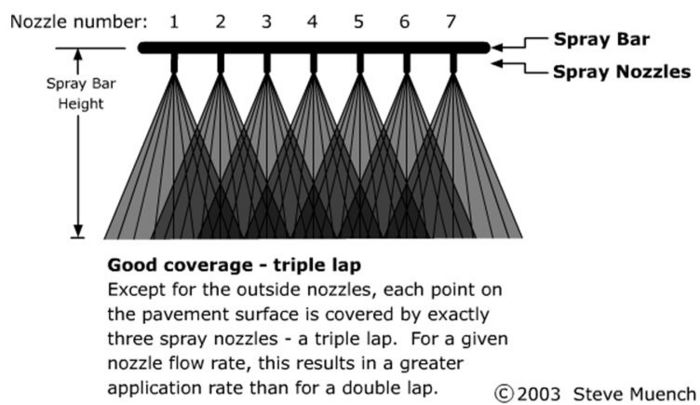 Specific guidance for distributor set-up are as follows:

Depending on the condition of the existing surface, the application rate may need to be adjusted from the target specified rate. This is acceptable as long as approval is obtained from the RE and the rate is within +/- 0.02 gal/yd2 of the target application rate as stated above. For example, an open textured surface, such as an SP250 mix, requires more tack than a surface that is tight or dense, such as an SP125 mix. A milled surface requires additional tack because of the increased surface area (from the grooves left by the cutting teeth on the milling machine). A dry, aged pavement also requires a heavier tack coat than a newer pavement. These conditions, and any other possibilities, must be considered when a tack coat is applied.

No dilution of tack coat is allowed in the field. Dilution of tack in the field may result in inaccurate dilution ratios, inadequate mixing of the material, incompatible water sources, or other issues that result in a poor quality product. Dilution is permissible if performed and supplied by the manufacturer. Additional water may be added to slow setting asphalt emulsions and mixed therewith in such a proportion that the resulting mixture will contain no more than 20 percent of added water.

Due to the set-up of some distributor trucks, dilution may be needed to aid in achieving uniform coverage. In order to maintain the same residual rate as a non-diluted emulsion, a diluted tack coat material shall be applied at a higher rate, as specified in the 20 percent diluted column in the above table. The increase in application rate needed for dilutions greater than 20 percent are not practical to place, therefore dilution shall not exceed 20 percent.

Two of the most important aspects of tack coat application are: 1) Achieving good uniform coverage and 2) Preventing the tack coat from tracking off the roadway.

Examples of unacceptable tack coat coverage are provided in Fig. 407.1.4.3. These tack coat applications are non-uniform to the point where the bond strength between asphalt lifts will be reduced and will significantly shorten the service life of the asphalt overlay.

Once good uniform tack coat coverage is achieved; the next step is keeping the tack on the roadway without being tracked off by construction equipment. Shortly after the tack coat has been applied, its color will change from brown to black as the water in the emulsion begins to evaporate, which is referred to as the tack “breaking”. Once the water has evaporated, the emulsion is said to have “set”. The time required to break and set depends upon the type of emulsion, the application rate, the pavement temperature, and weather conditions. Under most circumstances, a conventional emulsion will set in about 1 to 2 hours. Until the emulsion has completely set; there is a risk of the tack coat tracking off the roadway when construction equipment is allowed onto the tacked surface prior to the overlay.

The tack coat remaining on the roadway just prior to the paver should be rated as follows: Low Tracking, Moderate Tracking, and Heavy Tracking. Low tracking is preferred. Moderate tracking may be acceptable for rural areas and divided highways, but not acceptable in urban locations or locations with multiple entrances. Moderate tracking would also not be acceptable where it poses a safety risk to the travelling public by reducing surface friction on adjacent lanes or roadways and/or reduces visibility of roadway paint markings. For locations where no tracking or low tracking is needed; a Job Special Provision should be specified in the contract. Examples of Low Tracking, Moderate Tracking and Heavy Tracking are shown in Figures 407.1.4.4.1 through 407.1.4.6.4.

When heavy tracking occurs, paving operations should be stopped and the heavy track-off issues resolved prior to resuming paving. At a minimum, the tack coat should be re-applied just prior to the paver, at no additional cost to the Commission.

There are many ways to address heavy track-off issues with tack coat. The following items are listed to give guidance on possible solution to the tracking issues:

If all of the above items are conducted with further heavy track off; then the contractor needs to either wait until the tack is completely set, change emulsion types or use a spray paver.

The tacked surface should be covered with mix the same day. If this is not possible because of equipment problems (plant or paver breakdowns), sand must be lightly distributed over the tacked surface before opening to traffic. This will “blot” the tack, preventing it from being picked up by the traffic, and provide friction to the surface. When paving resumes, the excess sand must be removed and the surface re-tacked before the mix is spread.

The quantity of emulsion to be paid for will be determined in accordance with Standard Specification Section 1015.6 and rounded to the nearest whole gallon. For volumetric determination, the following equation should be used:

Tack Coat material shall be sampled and inspected in accordance with EPG 1015 Bituminous Material.

Maintenance uses tacking or tack-coating by applying a light spray application of cutback or emulsified asphalt to impervious surfaces such as Portland cement concrete, asphaltic concrete, or bituminous surfaces prior to resurfacing.

The purpose of the tack coat is to improve the bond between the existing surface and the roadway pavement. A tack coat shall be applied to provide a bond between old and new wearing courses. The best results occur when the tack is applied to a dry and clean surface, free of loose material.

The application rate will vary from 0.05 to 0.15 gal/yd2, depending on the condition of the old pavement surface. The pavement course surface should be evaluated to determine the amount of tack to be applied. A viscous material should be used because very little penetration of the asphaltic oil into the pavement surface is expected. The tack coat should be allowed to become tacky or sticky before the surface course is laid. Emulsions are recommended for tacking on heavily traveled routes. Too much tack can create a slippage plane between the old pavement and the new pavement overlay as the tack coat acts as a lubricant instead of an adhesive. Also too much tack could result in bleeding of the tack through to the new overlay surface, which can produce a slick pavement condition. After application of the tack, time must be allowed for the tack to break. Breaking is the phenomenon when the asphalt and water in the emulsion separate, beginning the curing process (brown to black color). Traffic should be kept off the tacked area.

Asphalt emulsions commonly used for tack coats areSS-1, CSS-1, SS-1h and CSS-1h. Polymers are allowed to be added to any emulsion which give benefits to both bond strength and achieving mat density by keeping the material from moving under the vibratory compactor. Hard penetration asphalt emulsions are also allowed in accordance with Sec 1015. Refer to Standard Specification Section 407 for additional information regarding tack coats.