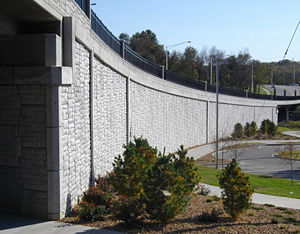 Sec 720 requires the contractor to deliver six copies of the MSE wall design plans. At least one of these copies should be forwarded to District Materials personnel.

Once District Materials has received a copy of the MSE wall plans, they should edit the Contract Sampling and Testing Requirements accordingly. Since MSE wall designs vary greatly, care should be given as to what components and quantities are required. At a minimum, there should exist a requirement for reporting the entire approved wall system. Also, since the granular backfill plays a crucial role in supporting the structure, there should be a requirement for the acceptance of this material.

Certifications should be received and checked for conformance to the various portions of Secs 720, 1052, 1011 and others necessary. The project office shall keep these certifications as part of the project files.

Due to the variance of designs, several AASHTOWARE Project (AWP) records may be required to correctly report acceptance of a MSE wall system and its components.

The acceptance of constructed wall system sections built to the approved design should be reported by Construction personnel using the 0720MSEW material code.

Various material codes exist for reporting the components used in MSE walls. Most of these components are accepted by certification as outlined in Sec 1052. Consult the Sampling Checklist regarding reporting requirements for your specific project.