Citizens have a say in how transportation dollars are spent. The most common way for citizens to be involved is through public meetings that MoDOT holds throughout the planning and project development processes. These meetings are held in communities around the state specifically to gather input from the general public. MoDOT employees attend to explain what is going on, answer questions and seek comments. Citizens can also participate in advisory teams that MoDOT sometimes establishes to help guide a project’s development. 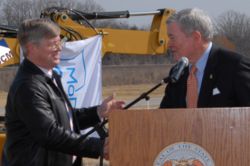 MoDOT and elected officials are part of decision-making

MoDOT also works closely with local officials to meet community needs. This doesn’t mean local officials will always get what they want; it means their opinions and issues will be considered. It also means they will understand the situation, and why in some cases, the answer must be no. Citizens have access to local planning organizations, city and county officials and elected officials to have a say in MoDOT’s decision-making process.

MoDOT focuses on involvement by local officials. These officials, who are elected by the general public, join to form regional boards of directors of Metropolitan Planning Organizations (MPOs) and Regional Planning Commissions (RPCs). MPOs represent urbanized areas with populations of more than 50,000. They are responsible for transportation planning within their areas. RPCs represent multi-county rural regions and coordinate regional local governments in transportation planning.

The public is involved by electing the local officials who comprise the RPC and MPO boards of directors and/or through direct contact with MoDOT, MPOs, RPCs or local officials.

The prioritization process structures decision-making and is primarily based on the categories in MoDOT’s funding distribution method. Each step in the planning and decision-making process includes opportunities for public involvement. Each district follows the same decision-making timetable for developing the construction program and involving the public.