The Federal Highway Administration and the States have established a goal that the LRFD standards be used on all new bridge designs after October 2007. For modification to existing structures and with the approval of the Structural Project Manager or Structural Liaison Engineer, the LRFD Specifications or the specifications which were used for the original design, may be used by the designer.

Piles are primary structural members and are compressively loaded all the time which makes it important to safely inspect, maintain and repair them if necessary. Pile inspection will require an assessment of pile performance by looking for pile deterioration and measuring pile section loss in order to determine the level of pile maintenance/repair required. The following schedule may be used for selecting the level of maintenance/repair required:

Quantifying pile section loss can be inexact. To encourage uniform application of the maintenance/repair guidelines, the following procedure is recommended:

Additional types of maintenance and repairs may be considered which include but are not limited to:

Place the following notes on plans.

The existing Asphaltic Concrete surface shall be removed to a uniform grade line (*) below the existing control grade line as noted.

(*) Depth of Asphaltic Concrete as specified in the Bridge Memorandum.

The following order of repair zones shall be used for the deck repair on continuous concrete structures.

Conventional deck repair required in the areas designated as special repair zones shall be completed before demolition in alphabetical sequence beginning with Zone A. Zones with the same letter designation may be repaired at the same time.

- Case 1 shall not be used for polyester polymer and low slump concrete wearing surfaces (too stiff for monolithic repairs).
- Conventional deck repair is required with void tube replacement after hydro demolition with both Case 1 and Case 2.
- If an excessive number of zones are required at any bent, see the Structural Project Manager or Structural Liaison Engineer.
- Consider combining zones if the length of a zone in the longitudinal direction of the bridge is less than 24 inches. 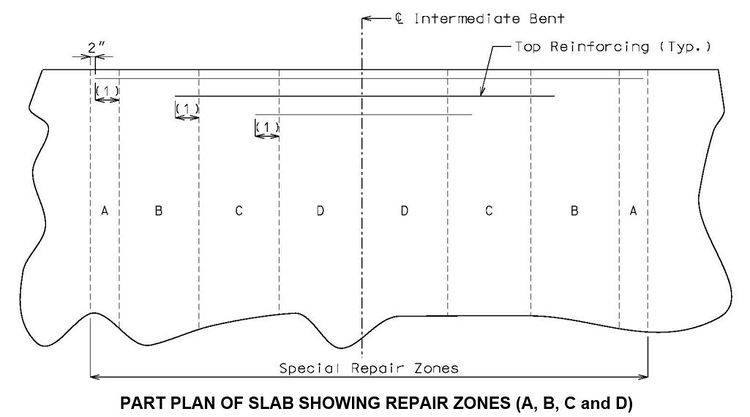 Any deck repair in areas not designated as a special repair zone shall be completed prior to work in Zone A. Zones with the same letter designation may be repaired at the same time.

- If an excessive number of zones are required at any bent, see the Structural Project Manager or Structural Liaison Engineer.
- Consider combining zones if the length of a zone in the longitudinal direction of the bridge is less than 24 inches. 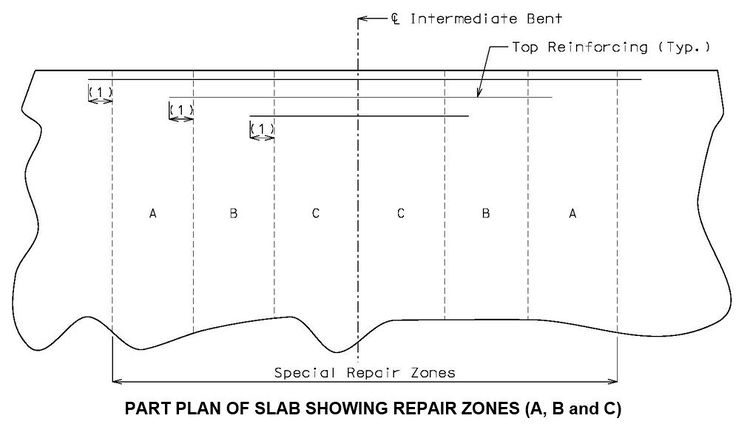 When to strengthen: When increased shear loading on an existing bent cap is required and a structural analysis shows insufficient bent cap shear resistance, bent cap shear strengthening is an option. An example of when strengthening a bent cap may be required: removing existing girder hinges and making girders continuous will draw significantly more force to the adjacent bent. An example of when strengthening a bent cap is not required: redecking a bridge where analysis shows that the existing bent cap cannot meet capacity for an HS20 truck loading, and the new deck is similar to the old deck and the existing beam is in good shape.

What condition of existing bent cap required for strengthening: If a cap is in poor shape where replacement should be considered, FRP should not be used. Otherwise, the cap beam can be repaired before applying FRP. Perform a minimum load check using (1.1DL + 0.75(LL+I))* on the existing cap beam to prevent catastrophic failure of the beam if the FRP fails (ACI 440.2R, Guide for the Design and Construction of Externally Bonded FRP, Sections 9.2 and 9.3.3). If the factored shear resistance of the cap beam is insufficient for meeting the factored minimum load check, then FRP strengthening should not be used.

* ACI 440.2R – Guide for the Design and Construction of Externally Bonded FRP

Design force (net shear strength loading): Strengthening a bent cap requires determining the net factored shear loading that the cap beam must carry in excess of its unstrengthened factored shear capacity, or resistance. The FRP system is then designed by the manufacturer to meet this net factored shear load, or design force. The design force for a bent cap strengthening is calculated considering AASHTO LFD where the factored load is the standard Load Factor Group I load case. To determine design force that the FRP must carry alone, the factored strength of the bent cap, which is 0.85 x nominal strength according to LFD design, is subtracted out to give the net factored shear load that the FRP must resist by itself. NCHRP Report 678 is referenced in the special provisions as guidelines for the contractor and the manufacturer to follow. The report and its examples use AAHTO LRFD. Regardless, the load factor case is given and it is left to the manufacturer to provide for a satisfactory factor of safety based on their FRP system. 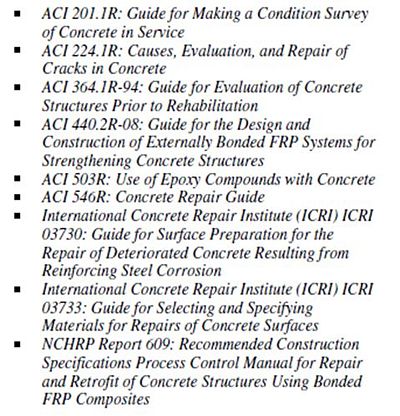 Show Barrier as per district recommendation. Typically Barrier is shown when structure is on interstate and/or the rail is being removed. Otherwise, show the dimension lines with 2'-0" dimension.

(** Where slab removal represents small and discontinuous openings in the deck along the bridge length (i.e. expansion device replacement) use of either a flat steel plate, a 22 ½” temporary traffic control device or a temporary concrete traffic barrier may be more appropriate. Consult with the Structural Project Manager or Structural Liaison Engineer. 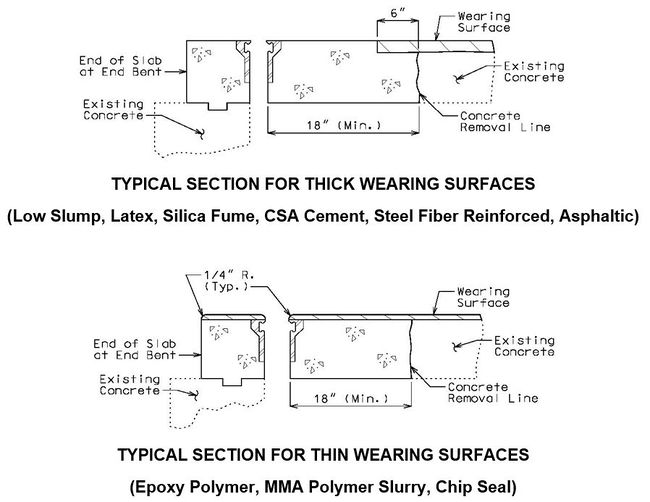