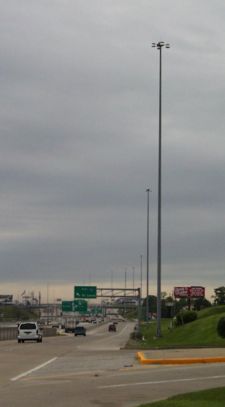 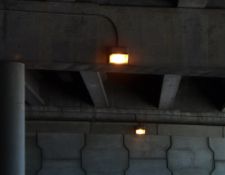 Only in exceptional cases can lighting be entirely from poles located in the median, such as depressed roadway with retaining walls or on or behind concrete median barriers because there is better utilization of lumens from lamps located on the outside of wide pavements. For example, when a 103-watt LED luminaire is located above the median edge of a six-lane highway with a 16 ft. median, and a mounting height of 30 ft., 40 percent is utilized. Where the same conditions exist for an installation over the outside edge, 58 percent is utilized. The maximum utilization is 60 percent. Good results are obtained by outside-inside alternating locations with twin bracket arms on the median poles. Underpass luminaires are sometimes mounted on the retaining walls of a depressed roadway.