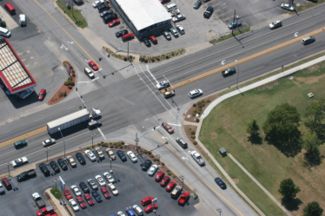 Driveway designs should always be based on the results of a study of the traffic likely to use them; these guidelines are presented to illustrate good practices for driveway designs.

940.16.1 LINING UP DRIVEWAYS ACROSS ROADWAYS. Driveways are to be as closely lined up with driveways across roadways without non-traversable medians as much as possible even if this produces less spacing between driveways.

The larger the radius, the faster the turning vehicle can get off the road and fewer through-movement vehicles need to slow.

940.16.3 RIGHT-TURN (APPROACH) RADIUS. Approach radii are to be large enough to allow vehicles to enter at a reasonable speed. The following are suggested as acceptable approach radii and are measured from the edge of the driving surface of the roadway. Any maximum approach radius is allowable for driveways.

Determine inside radii on a case-by-case basis given driveway angle, traffic volume and other relevant factors. Sites that generate substantial large truck traffic need inside larger radii to accommodate the wheel path of the turning trucks.

Adequate driveway width can help turning vehicles get off the road with a greater speed and less encroachment into oncoming driveway traffic.

940.16.4 DRIVEWAY WIDTH. No driveway is to have a width less than 20 ft. Driveways of greater than 54 ft. are strongly discouraged unless they contain a raised median to separate traffic lanes. Driveways that serve one-way traffic are to be from 20 to 30 ft. wide. Driveway widths are measured from the face of the curb to the face of the curb at the point of tangency. Any medians contained in the driveway are not included in the widths in the table. Appropriate widths for various levels of traffic and directions of access are shown in the table below:

Curb on approach all commercial and industrial driveways.

940.16.6 DRIVEWAYS AND ACCOMMODATION OF BICYCLES. Where a driveway crosses a bicycle facility, design the driveway and the bicycle facility so as to accommodate the safe crossing of bicyclists.

940.16.7 TAPERS. The distance between the entrance and exit tapers of adjacent driveways is to be 50 ft. or greater. If not, the tapers are to be eliminated and the shoulder paved to form a turn lane.

940.16.8 DRIVEWAY THROAT LENGTH. The throat length is the distance between the street and the parking lot served by a driveway. An adequate throat length helps to keep traffic conflicts within a parking lot to an acceptable level and provides space on the driveway for incoming and outbound traffic. The following throat length guidelines are suggested:

940.16.9 VERTICAL GEOMETRICS (DRIVEWAY GRADE CHANGE). Design access driveways on arterial roadways so vehicles can proceed into or out of the driveway at a speed that will prevent large speed differentials between turning and through traffic. Required apron lengths and desirable grade changes are shown in the table below. The apron is a relatively flat area where the driveway meets the public roadway. These guidelines apply to all types of driveways, including for residential, commercial and industrial. Driveways are to have a minimum grade change of approximately 1 percent to provide for adequate drainage. Either an upgrade or downgrade can be used.

Notes: The Apron Length is shown as “A” and grade change as “D” on the diagram below. The grade may change along the course of the driveway, as indicated by G1 and G2. In such cases, it is very important to ensure that the minimum apron length is maintained.

Required driveway surfaces depend on the roadway they are entering.

Having paved driveways is most critical on major roadways to keep the speed differential between through and turning traffic as low as possible. As noted before, all commercial and industrial driveways are to be curbed on approach.