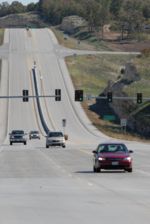 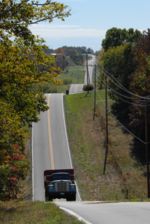 For both major routes and minor routes, the type of facility will be based upon the desired LOS given the 20-year traffic projection of the corridor. The six LOS grades are defined as:

At times, a poor LOS can be attributed to a lack of passing opportunities and vehicle’s time spent following slower vehicles. In these situations, the highway’s performance can be greatly increased by providing dedicated passing opportunities. While there are many ways to accomplish this, the improvement is generically referred to as a “passing lane”. The improvement can be as simple as the addition of a climbing lane on a steep grade or as complex as a 2+1 roadway that provides a continuous third lane to offer alternating passing opportunity to either direction of travel.