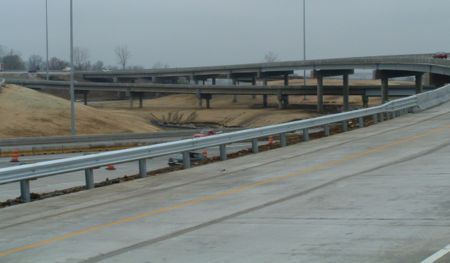 Multiple roadway safety studies have shown that guardrail along the edge of the road can reduce the number of crashes and their severity. A 1995 study cited in an ATSSA roadside safety report indicates that the presence of guardrail reduced the overall crash rate by approximately 30%, reduced fatality crashes by 45% and reduced injury crashes by 50 percent. NCHRP Report 490 (2003) presents in-service performance evaluation findings from studies in Connecticut, Iowa and North Carolina that found only a 3% severe injury rate for crashes involving w-beam guardrails.

When a roadside obstacle exists, treatment should be considered in the following priority:

In many cases, it is either impractical or impossible to eliminate a roadside obstacle, redesign the obstacle so it can be safely traversed, relocate the obstacle to a point where it is less likely to be struck or provide an appropriate breakaway device that will reduce impact severity. In these cases, shielding of the obstacle will be needed to protect the errant vehicle from the obstacle and to provide a more forgiving roadside.

Roadside barriers, whether they be concrete, guardrail or guard cable, are themselves obstacles. Even though they are engineered and rigorously tested to preserve the safety of vehicle occupants, all shielding systems cause damage to the vehicle and/or sustain damage themselves when impacted.

Guardrail Face. The guardrail face is the length of w-beam or thrie beam guardrail extending from the end terminal alongside the roadway. Its primary function is to direct impacting vehicles away from the obstacle the guardrail is shielding and redirect them back onto the roadway.

Guard cable contains and redirects vehicles away from impacting an object or terrain that is less forgiving than the guard cable. It consists of a series of steel cables mounted on weak posts placed to capture and redirect errant vehicles. 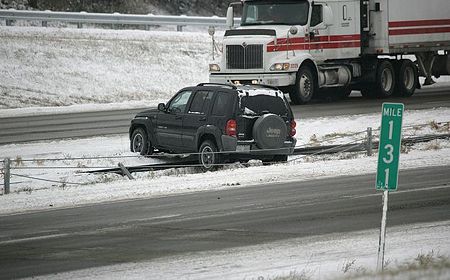 Guard cable is also commonly used in interstate medians to help prevent vehicles from crossing the median and entering into opposing traffic lanes. Guard cable may be used instead of guardrail on new construction projects in locations outside of the clear zone where the designer wants to protect an errant vehicle from leaving the roadway and entering areas with steep slopes and high fills. Substitution of guard cable for guardrail is not recommended on sharp curves.

Test level three (TL-3) is probably the most common as it establishes safety criteria for both small cars and pickups at 62 mph. This category of traffic accounts for nearly 90% of all vehicle traffic in Missouri.

The table entitled "What is TL-3?" summarizes data for the six test levels.

A roadside safety hardware feature must undergo rigorous safety testing before it can be used on the National Highway System (NHS). Most states have adopted the same testing criteria for highways that are not on the NHS. The standard by which all roadside safety features are measured is contained within the MASH 2016.

1) Structural Adequacy: the system must contain and redirect the vehicle with no under-riding, overriding or penetration.

2) Occupant Risk: fragments of the system cannot penetrate the passenger compartment, the vehicle must remain upright during and after the collision, and the passenger must not undergo excessive impact or deceleration.

3) Vehicle Trajectory: after the impact, the vehicle should not intrude into adjacent traffic lanes nor should it exit the system at an angle greater than 60% of the entry angle. 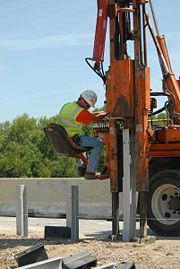 Construction Requirements (for Sec 606.3) Inspection of guardrail, crashworthy end terminals, three-strand guard cable and one-strand access restraint cable is usually done on a spot basis. The contractor is to be given enough reference points from which to establish line and grade. Points to check during installation are alignment of posts and possible damage from driving. Completed rail or cable should be checked for alignment, position with respect to the travelway, elevation, soil backfill and proper direction of lap for beams. Bolts are to be tightened to manufacturer specifications. All elements of construction are to be checked for installation damage.

Post driving frequently causes damage to stabilized shoulders. No installation is to be accepted until such damage has been satisfactorily repaired in a manner preventing ponding of water around the posts.

Delineators (for Sec 606.10.2.3). Delineators should be placed on all guardrail located 2 ft. or less from the edge of the shoulder. The delineators are to be spaced at 50 ft. intervals. Refer to this specification for more detail on delineator body, retroreflective sheeting and delineator color requirements.

Crashworthy end terminals (CET) may not be substituted for a lower type CET without the districts’s core team approval. For example, a Type D CET cannot be replaced by a Type C device.

Articles in "606 guardrail and guard cable"

The following 2 pages are in this category, out of 2 total.