Difference between revisions of "Category:607 Fencing" 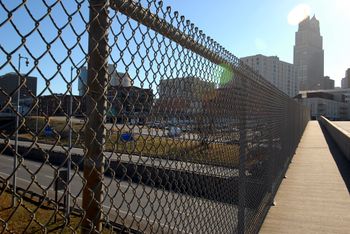 Fencing policy is to reasonably guarantee access control to the motorist. It is not the intention of this policy to provide fencing on an indiscriminate basis since all fencing provided by the plans is to be maintained by the state. Maintenance forces would not normally be expected to erect the access control fencing discussed in this policy. At isolated locations, effective control can be achieved with a minimum of work through minor grading, ditching, placement of posts, etc., and is preferable to the development of extensive control by fencing.

Where outer roadways are provided, the use of one-strand access restraint cable (for access control only; see Standard Plan 606.40) may be considered as a substitute for fencing at the access control line when the primary purpose of fencing is to prevent vehicular movements.

Completed sections of interstate highways are to be reviewed and fencing provided in accordance with this criteria. Fencing is to be placed regardless of previous compensation for fencing to property owners.

All fence so provided on the plans shall be maintained by the state.

Fencing for other fully limited access highways is to be determined on each project's needs but generally will not be required.

Where generally acceptable private fences exist, they may be utilized to develop the necessary continuous fencing but maintenance shall remain the responsibility of the owner.