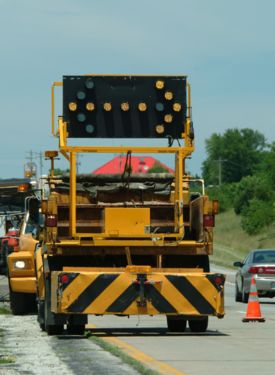 Truck-mounted attenuators (TMA) are safety devices to be used for all mobile operations conducted near traffic. Damaged TMAs are to be removed from service and either repaired or replaced.

This system consists of a group of freestanding plastic barrels configured in increasing weights from the impact point toward the object. Such an array transfers the vehicle’s momentum to the increasing masses of sand in the barrels and provides a gradual deceleration. Each barrel is designed with a specific weight of sand to absorb the energy of an errant vehicle. Sand barrels are the preferred crash cushions for concrete traffic barrier, and are used when sufficient width is available for their placement. Refer to Standard Plan 612.20 for details. When specified, quantities are calculated and shown on the plans. No direct payment is made for the Type 1 object marker on the lead module. An estimate for replacement barrels needs to be included as a separate pay item, typically calculated as one for every ten barrels.

Sand barrels are most often used to shield fixed objects that cannot be removed or relocated. Sand barrels are recommended for temporary usage such as in work zones. A benefit/cost analysis is to be conducted before sand barrels are used in a permanent application.

An approved sand-filled impact attenuator may be installed on the exposed end of the barrier where the posted speed prior to construction on an existing facility or the anticipated posted speed of a temporary facility is greater than 35 mph. A crash cushion will be required on the upstream end for divided facilities, and on both ends for all two-way facilities. (Crash cushions are discussed in 616.6, Lighting Devices. Applicable pay items are included in the plans.

This category contains only the following page.