Category:949 Other Aspects of Traffic

The 10-degree reading that can be maintained the complete length of a curve is the appropriate safe speed for that curve. Care must be taken to maintain the car in its proper lane and to maintain a smooth even speed throughout the curve. It will occasionally be found that a curve will have a higher safe speed in one direction than the other. In such cases, the lower safe speed should be used for both directions. Only increments of 5 mph are used on the Advisory Speed Plaque, therefore the curve shall be posted to the nearest 5 mph speed from the survey.

949.2 Requests from Cities for Annexations

All requests from city officials for voluntary annexation of Commission right of way and other Commission-owned property should be submitted to the respective district office. The request must include a statement from the city officials verifying all adjacent property owners, the county where the area to be annexed is located, and all cities within a five-mile radius of the area to be annexed have been notified of the pending annexation and their reaction to that notice.

Petitions for Voluntary Annexations will not require approval as to form by the Chief Counsel’s office or attestation of the Secretary of the Commission.

In all cases where the Petition for Involuntary Annexation is filed against the Commission or MoDOT, the Chief Counsel’s office shall make its entry of appearance in the case and take a non-adversarial position unless justification exists for opposing the involuntary annexation, in which case the Chief Counsel’s office shall enter an appropriate defense.

A checklist for request of annexations is available.

If the District Engineer believes that a city, village or town has enacted such an ordinance, he shall see that the following actions are taken: 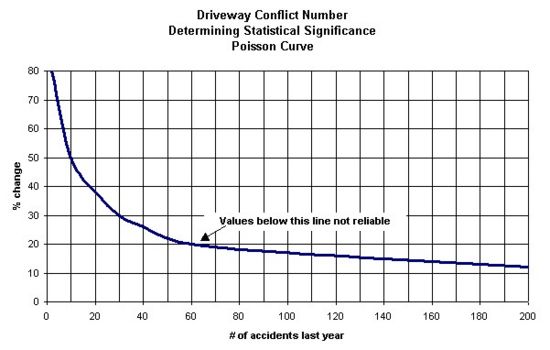 a) Consult Fig. 949.4.2, using the current number of accidents for the last year.