Class B-1 Concrete (Substructure) may also be used in special cases (See Project Manager). The following equations shall apply to both concrete classes:

= 1.0 unless determined by physical testing

In general, each component shall satisfy the following equation:

The following limit states shall be considered for abutment design:

The force due to expansion or contraction applied at bearing pads are not used for stability or pile bearing computations. However, the movement due to temperature should be considered in the bearing pad design and expansion device design.

When Wing Length, L, is greater than 22'-0", use maximum of 22'-0" rectangular wing wall combined with a detached wing wall. 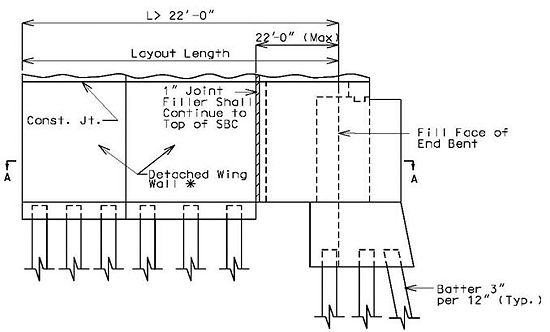 Part Section Thru Backwall and Wing

Limits of Earth Pressure and Surcharge