The topography of the land traversed has an influence on the alignment of roads and streets. Topography affects horizontal alignment, but it has an even more pronounced effect on vertical alignment. Variations in topography are generally separated into three classifications according to terrain:

These classifications pertain to the general character of a specific roadway corridor. Roadways in valleys, passes, or mountainous areas that have all the characteristics of roads or streets traversing level or rolling terrain should be classified as level or rolling. Generally, rolling terrain generates steeper grades than level terrain, causing trucks to reduce speeds below those of passenger cars; mountainous terrain has even greater effects, causing some trucks to operate at crawl speeds.

The operational characteristics of a roadway are directly affected by the length and steepness of the vertical alignment. The designer is to consider the road’s terrain, traffic volume, expected capacity, LOS and other safety factors in order to properly anticipate the posted speed. Highways will be designed according to their anticipated posted speed as opposed to an arbitrary design speed.

Once the anticipated posted speed is identified, the road’s vertical alignment can be selected. The AASHTO publication A Policy on Geometric Design of Highways and Streets (the Green Book) can be used as guidance to determine the maximum vertical grades.

When terrain or some other factor causes the maximum grade to be impractical for a roadway segment, a grade in excess of those indicated in the Green Book can be incorporated into the design and the posted speed for that roadway decreased.

While the operational characteristics of a roadway are directly affected by the length and steepness of the vertical alignment, extensive steep terrain in urban areas is not typically encountered. While no maximum grade for urban roads is specified, the Green Book’s table “Recommended Maximum % Grades for Rural Major Roads” can be consulted to determine an urban major road’s grade.

Terrain, traffic volume and the anticipated posted speed are to be considered when selecting a roadway’s maximum vertical grade. 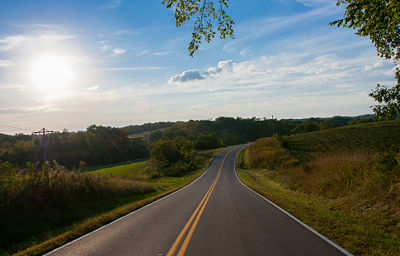 Passing sight distance for use in design is determined on the basis of the length needed to complete normal passing maneuvers in which the passing driver can determine that there are no potentially conflicting vehicles ahead before beginning the maneuver. While there may be occasions to consider a multiple passing (where two or more vehicles pass or are passed) it is not practical to assume such conditions in developing design criteria. Instead, sight distance is determined for a single vehicle passing a single vehicle. Longer sight distances occur in design of a roadway and such locations can accommodate an occasional multiple passing. Minimum passing sight distances for design of two-lane roadways incorporates certain assumptions about driver behavior. Actual driver behavior in passing maneuvers varies widely. To accommodate these variations, the design criteria for passing sight distance should accommodate the behavior of a high percentage of drivers rather than the “average” driver.

The minimum passing sight distance for two-lane roadways is determined as the sum of the following four distances:

Table 3-4 of the AASHTO Green Book can be used to determine passing sight distances for various speeds. These values are based on a 3.5 ft. height of eye and a 3.5 ft. height of object. Horizontal alignment is also considered in determining the location, extent, and percentage of passing distances. If passing maneuvers are to be performed on upgrades under the same assumptions about the behavior of the passing and the passed vehicles, the passing sight distance should be greater than the derived design values. Specific adjustments for design use are not available; however, the designer should recognize the desirability of exceeding the values shown in Exhibit 3-7 where practicable.

Passing sight distance is not a design consideration for divided lane facilities.

At least four different criteria for establishing lengths of sag vertical curves are recognized to some extent. They are:

The "K" factors shown in Figure 3-44 and Table 3-36 of the Green Book are for the most part based upon headlight sight distance and are to be used in the design of sag vertical curves. Where practicable, vertical curves at least 300 ft. in length are used.

In some restrictive situations, the sag “K” factor determined above may be reduced to satisfy passenger comfort criteria. The length of vertical curves needed to satisfy the “comfort factor” at the posted speed is about 50 percent of that needed to satisfy the headlight sight distance criterion for the normal range of design conditions. The following formula (based on 3-51 of the Green Book) may be used to determine the length of the sag vertical curve for the reduced K factor.

It is desirable to avoid vertical and horizontal curves on bridges. When a horizontal curve is unavoidable on a bridge, spirals and superelevations are not to be placed on the bridge itself unless absolutely necessary. To facilitate drainage, it is preferable that level grades not be used on a bridge; however, if the bridge is on a level grade, the roadway profile grade is to be kept as level as possible for a distance of 50 ft. from the ends of the bridge at locations where the approaching roadway grade is below the bridge elevation. This will reduce the impact load on the bridge. Flat grades and sag curves can cause drainage problems on bridges, especially those over railroads or other roadways, and should be avoided. To avoid drainage problems, the low point of a sag curve will not be placed on the bridge unless absolutely necessary.

Minimum vertical clearances over roadways will be maintained. The Design Division must approve use of a reduction of vertical clearance below the minimum, as a design exception. Once approved, the project manager will notify the District Construction and Materials engineer to ensure measurement and posting of the final vertical clearance is accomplished.

Grade considerations for at-grade intersections also apply to the area where an interchange ramp intersects a crossroad. Where ramps merge with the through roadway, grades are established by projecting the through roadway profile grade to the edge of the ramp pavement, using crown and controlling cross slopes at sufficient points in the vicinity of the ramp nose to determine a grade for the ramp in this area. Otherwise grade control for ramps are the same as for other roads, based on the anticipated posted speed. Additional information concerning sag vertical curves can be helpful when establishing grade controls for ramps.

Design controls for vertical alignment on outer roadways and service roads are based on the anticipated operating speed just the same as the controls for other roadways. However, the vertical alignment is modified to the extent necessary to provide adequate service to adjacent properties. Grades in the vicinity of streams are established to provide at least the same service level in relation to the stream high water that existed prior to the roadway improvement.