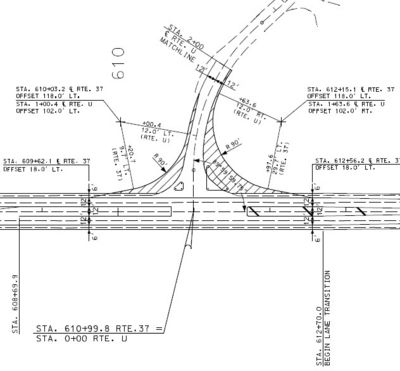 The details required on plans are further discussed throughout the Engineering Policy Guidelines. The designer is to refer to the standard specifications for more information on individual items.

All sheets for plans are electronically submitted via the ProjectWise document management system in PDF format generated as a D-size (22 in. x 34 in.). Drawings need to be centered on the page, so that no part of the drawing is cut off during reproduction. Shading, dense hatching, aerial photographs, pictures and line weights less than 1 are not allowed because those areas will not copy adequately. The district identifies all sheets by the job number.

Plans are to be neat and prepared to the precision requirements outlined in Table 237.1.1. Plans shall be developed in accordance with Specifications of Computer Deliverable Contract Plans. CADD Standards are to be adhered to when preparing plans. This manual is a visual reference to the settings managers used by MoDOT, showing lettering styles and sizes and common symbols used in plan production.

A consultant’s logo shall be placed on all plan sheets produced for MoDOT improvement projects. The logo will not be larger than 2 in. in height or width (as measured on a standard size sheet as specified above) and will be located immediately above, below, or adjacent to the title block.

Precision. Plans, plan quantities and plan dimensions are developed on the basis of precision and to significant figures consistent with the basic data on which they are developed and consistent with the unit of measurement and basis of payment for the items being considered. It is useless to compute angles, curve lengths, etc. for interchange geometrics to 0.001 ft. and 0 degrees 00 minutes 01 seconds accuracy when the survey data, on which the calculations are based, are measured to the nearest 0.01 ft. and 0 degrees 00 minutes 6 seconds. Another example is that detail drafting and calculations for a precise length of box culvert are not necessary because the end lengths of box culverts are measured, and quantities are computed, on the basis of a length to the nearest foot. Precision for dimensions used in the preparation of plans is shown in Table 237.1.1. The precision for other items is consistent with the figures given. Where computed items are rounded to the specified precision or quantity, half increments, or more, are rounded to the next higher unit. Less than half increments are rounded to the next lower unit.

Project limits are set to define major work limits that are usually the limits of surfacing for the main roadway, excluding connections. Project limits usually begin at the first full typical section and minimum right of way; incidental work such as the construction of bypasses and temporary connections, and sometimes grading, may extend beyond project limits. If separate contracts are awarded within the limits of any one project, the design plans are to delineate the area of interfacing with any other contracts.

Federal requirements specify that stub-end routes on the supplementary system must end at a local traffic generating point. A local traffic generating point is defined as a town or village, school, church, cemetery, cluster of farm buildings, state parks or a county road intersection. All projects must have logical termini, as described in Logical Termini, including level course, pavement marking, etc.